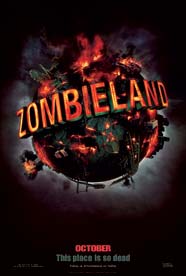 A cowardly shut-in named Columbus (Jesse Eisenberg) is forced to join up with a seasoned zombie slayer named Tallahassee (Woody Harrelson) in order to survive the zombie apocalypse.

As Tallahassee sets out on a mission to find the last Twinkie on Earth, the duo meets up with Wichita (Emma Stone) and Little Rock (Abigail Breslin), two young girls who have resorted to some rather unorthodox methods to survive amidst the chaos.

Reluctant partners in the battle against the undead, all four soon begin to wonder if it might be better to simply take their chances alone. – Jason Buchanan, All Movie Guide

This entry was posted in Movie Reviews, Special Interest. Bookmark the permalink.